A general note regarding polarity

When connecting multi-way cables, red will always be +ve. Ground (-GND) will be black, green or white, depending on the particular jumper being connected. Just make sure that if two connectors are going onto the same board, that the red wires line up with each other, and that they are at the pin labelled +5V.

LED pods will only work one way around. If an LED pod is not emitting any light on power up, it simply needs to be rotated with respect to its connecting cables. Pull it out of both, taking care to hold the two connectors together, treating them as one two-row connector. Rotate it 180 degrees and reconnect.

The Playfield Distribution board comes with cables already connected and looks like this..

The photo also shows the other ends of the cables that are plugged into the board. You will notice one cable is a four-way and the other a three-way.  The RGB cables of the three-way cable terminate at the included adapter board as shown below..

..and the four-way cable terminates at the green terminal block on the Matrix Interceptor board.

Put your Playfield Distribution board somewhere like in this picture. Towards the rear of your playfield. 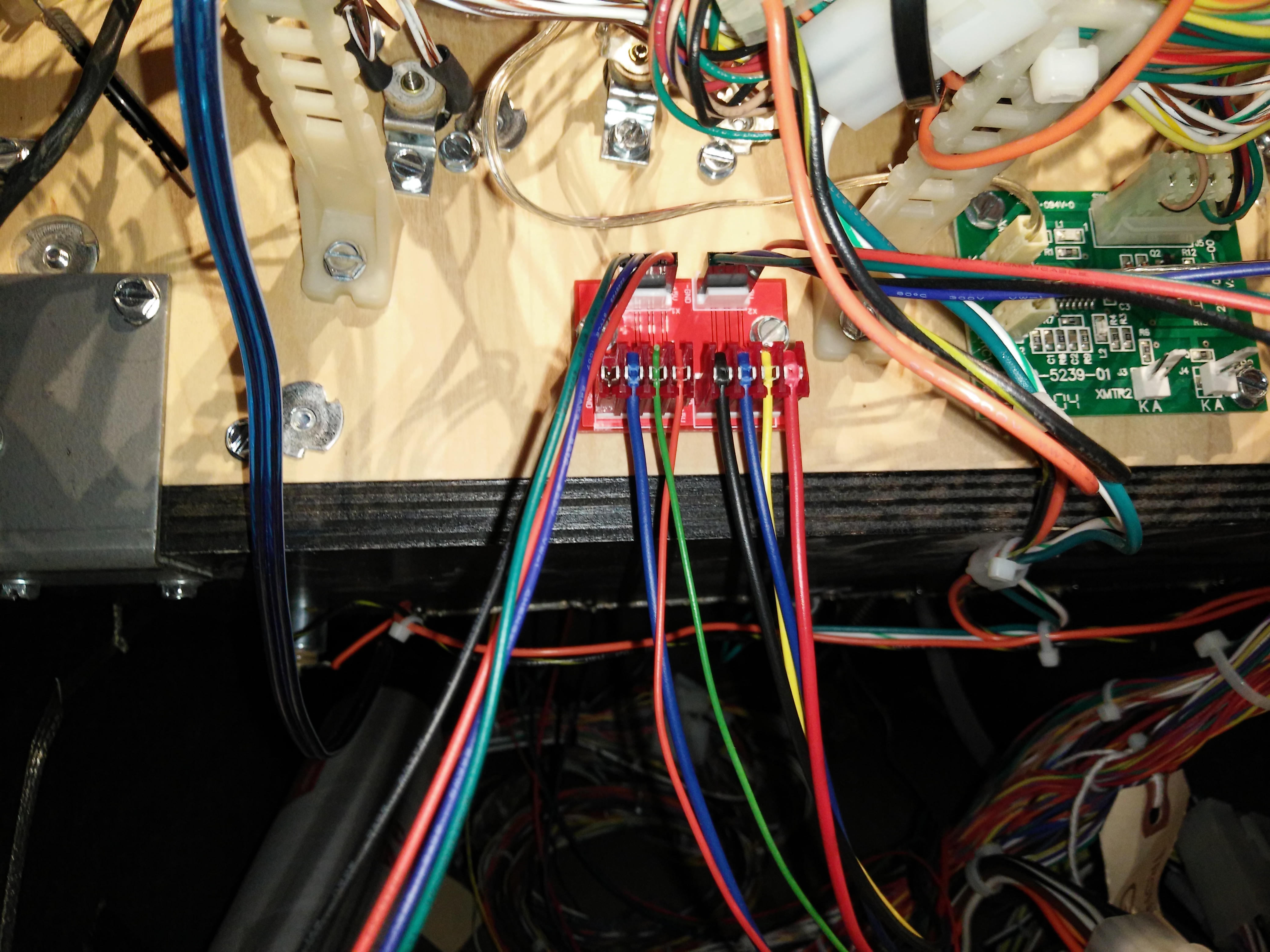 LED drivers and LED pods connect to the Playfield Distribution board as follows.. Most of these cables are already connected out of the box.

Place your LED driver boards in the vicinity of the protruding optic fibres.. 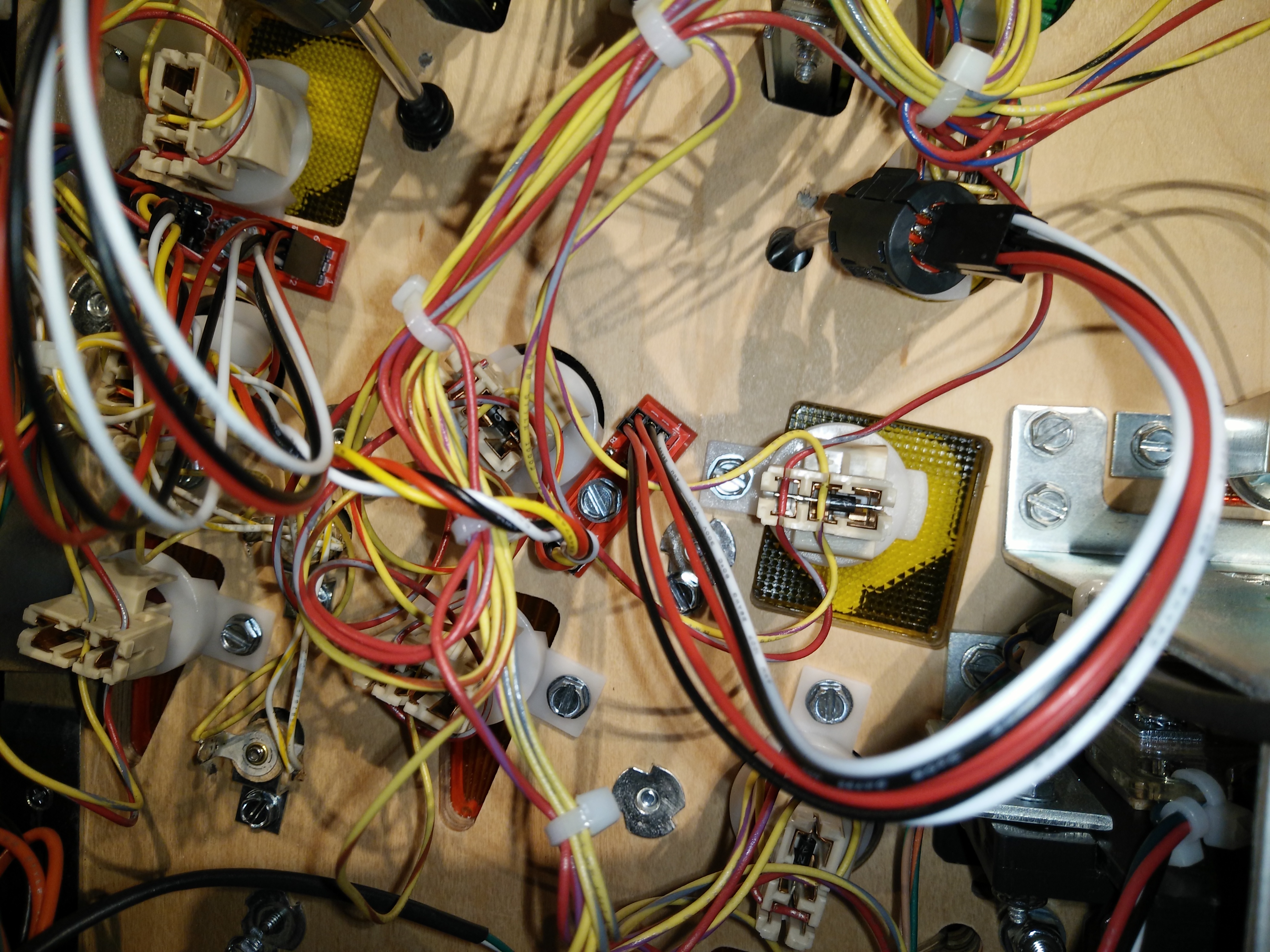 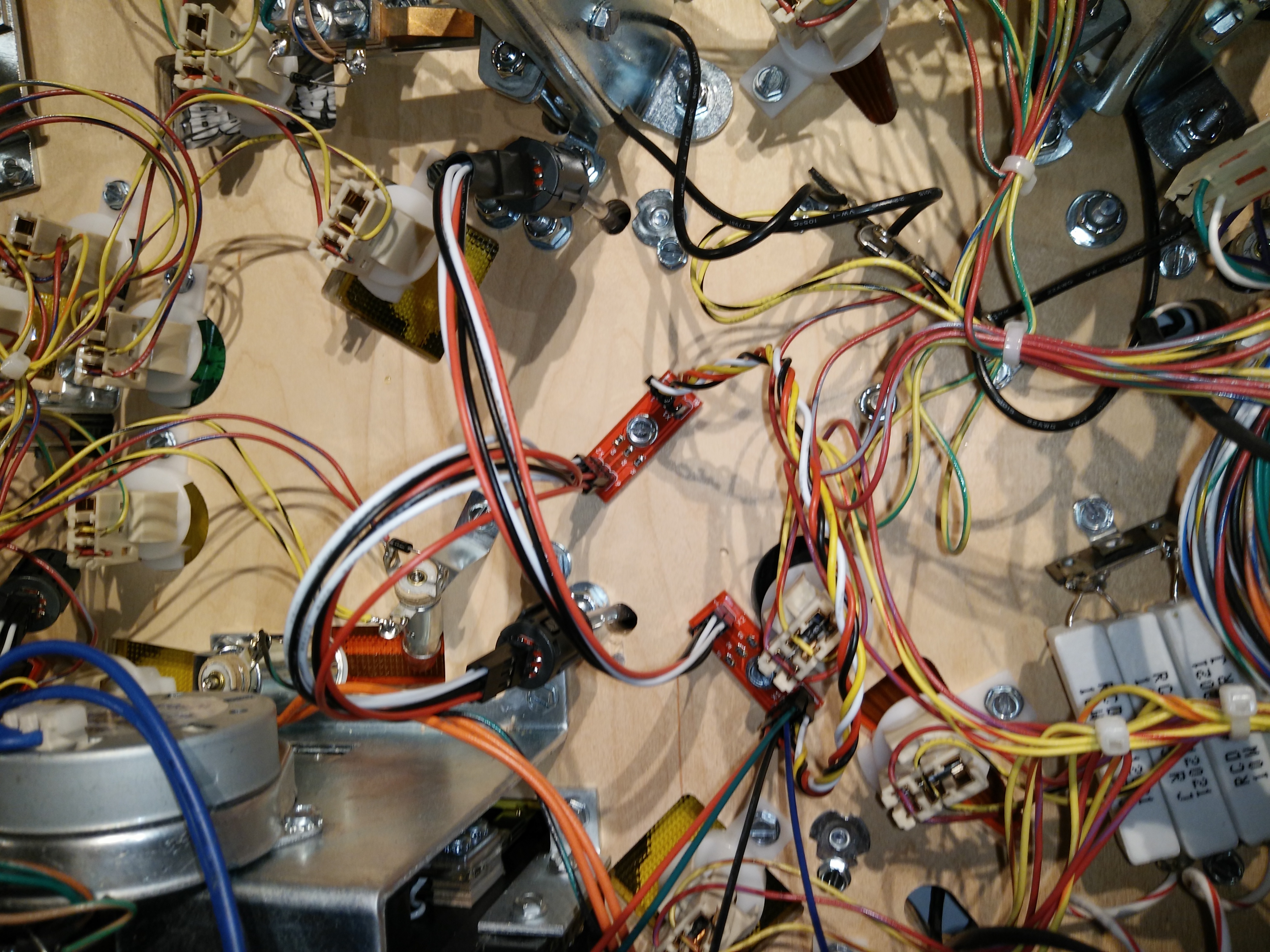 Connecting Cables back to the backbox.

This section outlines how to connect cables back to the Matrix Interceptor.

Here are the connections at the screw terminal block. They are labelled OUT 5, OUT 6, OUT 7, OUT 8 with interleaved grounds (GND) between each OUT. And behind the terminal block is the five-pin output connector traditionally used for the GI Interceptor in Metallica, but which is used in Tron for the three-way cable returning from the Playfield Distribution Board. The connections at the terminal block are as follows..

This photo shows where the above cables come from..

And the adapter for the three-way cable plugs in here..

CONNECTING THE POWER    (APPLICABLE FOR ALL KITS)

The supplied power cable plugs into the auxiliary 12V outlet located near the coin door. The cable then runs through the cabinet and up to the back box in a similar manner to the socket string cables. The power cable is polarized at each end and can only plug in the right way around (without forcing it), but I have pointed out the polarity in the video just for extra clarification.

This section outlines how to mount your optic fibers to the ramps.

It is strongly advised to remove your ramps. This is a very simple operation on Tron. There is absolutely no time or labour advantage gained by attempting to fit the optic fibers to the ramps whilst they are still on the playfield. A few screws and a couple of plugs per ramp sees your ramps out easily. Literally in a few minutes, with nothing particularly difficult.

Before proceeding, watch this short video for an optional procedure you may want to apply to some of the optic  fiber mounting clips.

TREAT OPTIC FIBERS WITH CARE. Avoid kinking or scratching. They are quite robust and don’t need to be handled with kid gloves, but don’t be silly with them. A kink WILL show up as a bright spot.

Parts included in your kit for this step.. 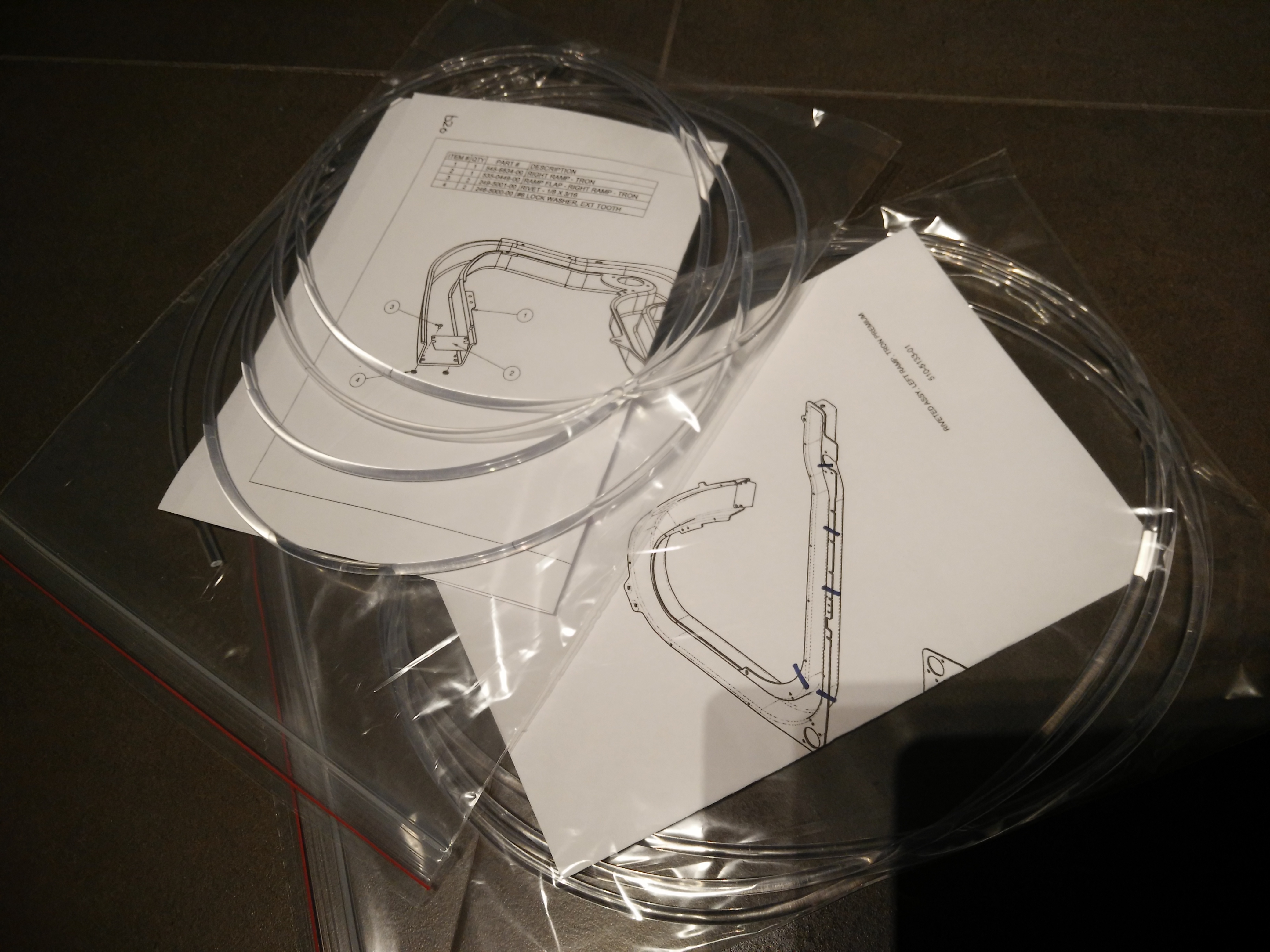 Each fiber is packed with a drawing showing the ramp that that fiber is designed for. If you ever mix them up, the longer fiber is for the outer ramp and the shorter fiber is for the inner ramp. (“Inner” and “Outer” are less ambiguous labels for the Tron ramps as “Left” and “Right” get confused because of the cross-over). 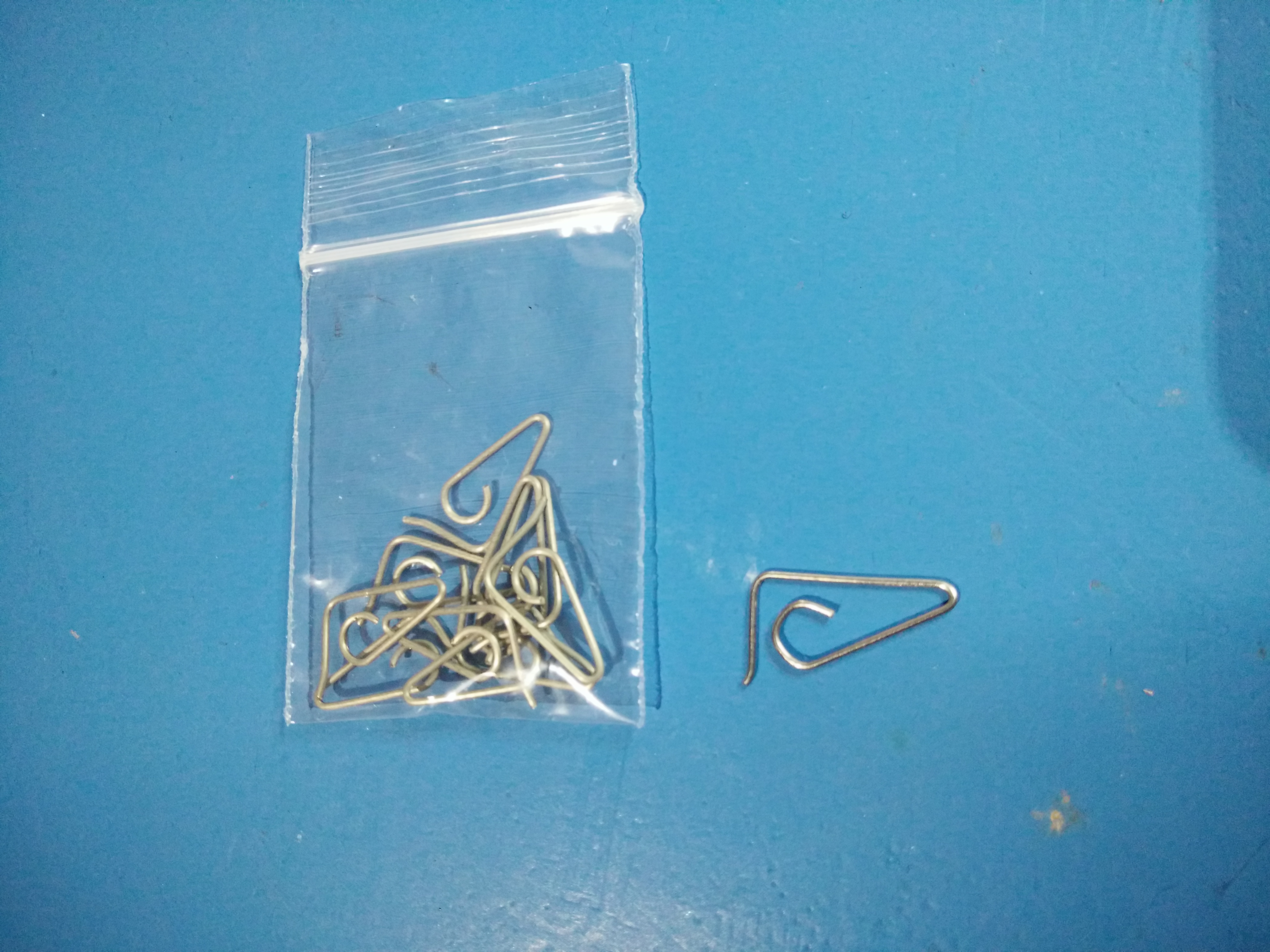 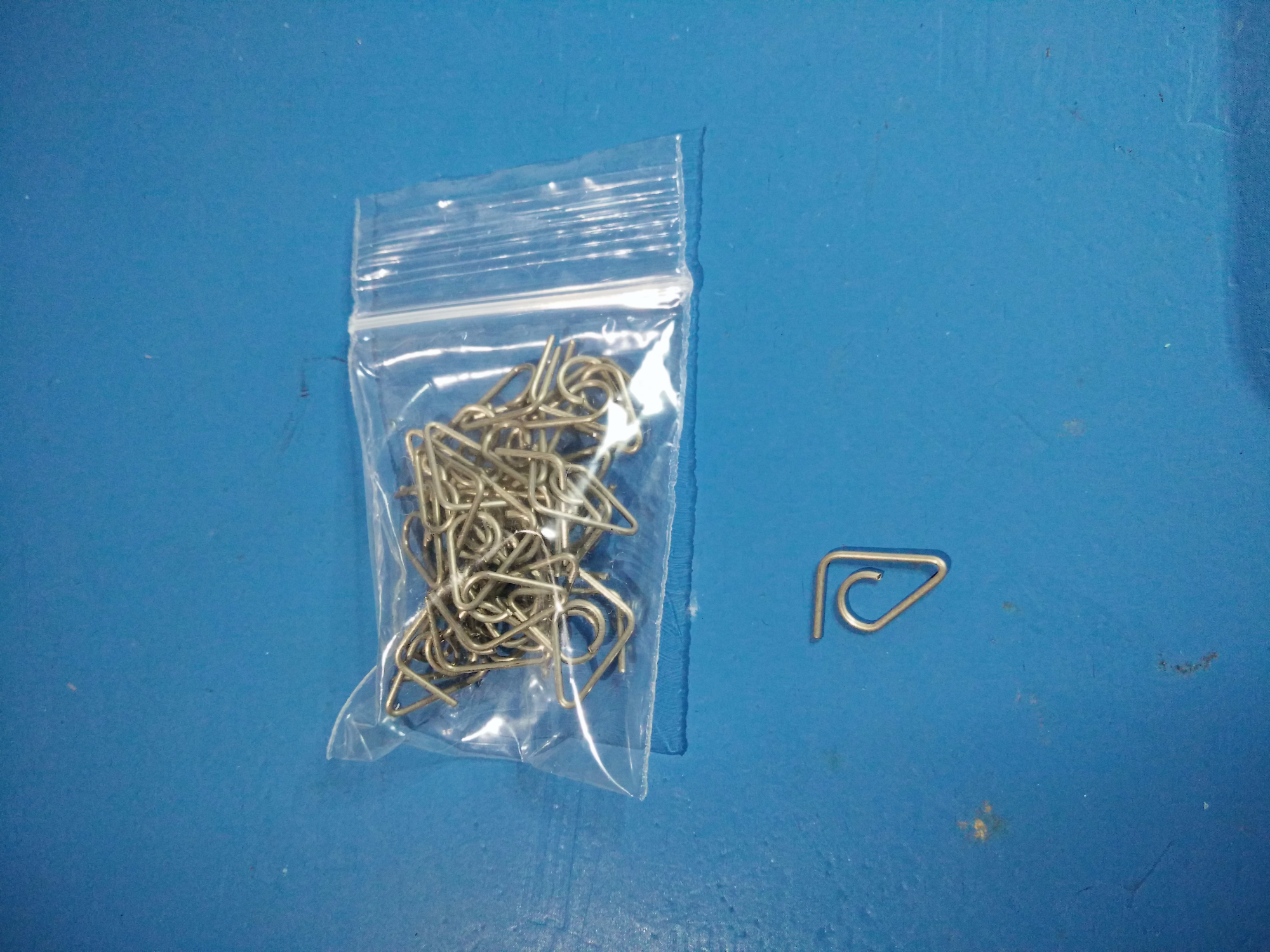 The basic approach is to slide all the clips onto the fiber, spread them out into approximate position, then lay out the fiber around the ramp and slide the clips over the edge of the ramp, working from the U-turn to the loose ends.

There are more short clips than long clips. The drawing for each ramp includes markings that show the recommended position of the long clips. Short clips are spread around the ramp at roughly equal spacings.

The clips need to be slid onto the fiber IN ORDER and in the RIGHT DIRECTION. They cannot be applied to the fiber from the side. If clips are out of order you will need to slide some off to get the right clip on at the right point.

Place your ramp upside down in an open area.

Lay your clips out around the outside of the ramp to confirm positioning.

Pro-tip. Ensure that a clip is placed at the midpoint around an inside radius.

Check the direction that the clips need to sit on the fiber in order to slide correctly over the edge of the ramp.

Slide all the clips onto the fiber, being sure to slide them gently so as to not dig into the surface of the fiber. They slide very easily if kept perpendicular to the axis of the fiber.

Working from the U-turn point of the fiber at the inlane return ball-drop end of the ramp, slide each clip over the flange of the ramp until it clicks into place. The long clips can be laid over to the side a little for an easier fit.

Once the ramps are reinstalled, the loose ends of the optic fibres will protrude through the playfield holes to the underside of the playfield.